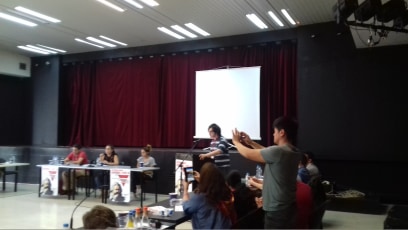 The delegates of the Connolly Youth Movement stand proudly beside the youth of the international communist movement today in celebrating the 200th birthday of Karl Marx, the founder of our cause, who bequeathed us a will for change that has electrified the thoughts and homes of millions, elevated nations from poverty and replaced misery with hope. Marx as a teacher enabled us to build a better world on scientific lines, eschewing false utopian promises for the concrete victories of daily life.

We, as Irish delegates, are well placed in also commemorating 100 years since the foundation of our first national parliament, through which we began the undoing of our colonial fetters.

We, as workers of the world, are equally well placed to understand the failure of national liberation alone to free the workers. As we stand ten years after the global financial crash of 2008, our people’s subjugation to finance capital has been made explicit.

In the light of these momentous historic events, we re-affirm that our revolution is unfinished.

We re-affirm our commitment to patriotic internationalism and solidarity with the workers of all countries.

We re-affirm our commitment to fight not merely for the repeal of austerity, but the achievement of total political power by our class.

We re-affirm our commitment to break our connection with all neo-colonial entities to establish ownership of Ireland solely by the people of Ireland.

We re-affirm our commitment to continue the vision laid down by Marx, Lenin and Connolly, adapting their theories to new conditions and new struggles.

The action our commitment demands is to engage in every form of work open to us in attacking institutions of capital, building dual power of communities against financiers and relentlessly forwarding class analysis in all places of work and education.

We strive, first and foremost, to lead by example, regardless of risk or penalty, by refusing to bring false alternatives to the workers which we have not already begun to build.

We strive to restore the collective consciousness of our generation which has been destroyed by decades of neoliberal atomisation.

Marx’s life work of analysing the tendency of capital to commodify every aspect of nature has been proven true in every respect as every resource from individual molecules to our air to our drinking water has been taken into private ownership. Our century is one of zero-hour contracts, union-busting and privatisation as capital intensifies its existing avenues of exploitation in the consolidation of its victories. It no longer needs to reproduce its labour power as it moves freely, unlimited by a new paradigm of complete permeability of labour, capital and goods.

The greatest kernel of Marx’s thought, however, is not solely a critique of capitalism. It is the methodology of dialectical materialism, the science of revolution. He gave us the tools necessary to understand our oppression and to weaponise it against our oppressors. While international politics

abounds in confusion and nonsense, we have the ability to reunite cause and effect. Through Marx, we have a way forward, a way to exit the weak illusions safeguarded by liberal democracy.

In marking the passage of time since his birth, though we are faced with the challenge of updating his theory to a world which has brought his predictions further than he could imagine in his material conditions, our principles remain unbroken.

We stand against imperialist wars and the integration of Ireland into NATO and PESCO.

We stand against the eviction and dispossession of young workers from their homes and families. On the 11th of September, the police and private security operatives smashed in a door in an occupied building, attacked the inhabitants, hospitalised some of them and arrested others. This is the reality in Ireland.

Our youth, which has faced the consequences of counter-revolution and reaction, has built new foundations and discovered new strengths. We have inherited a legacy, passed to us un-reconstructed by our party comrades, which encompasses almost a century of resistance. We are prepared to take this legacy into a new century and pass it to the next generation undiluted. In the words of Marx: Communism is for us not a state of affairs which is to be established, an ideal to which reality will have to adjust itself. We call communism the real movement which abolishes the present state of things.