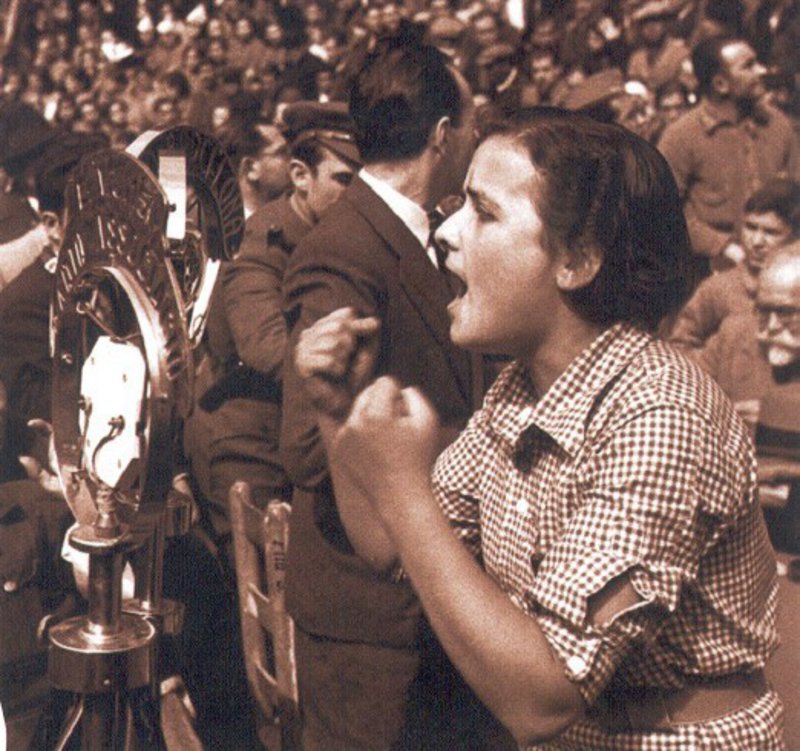 During the Spanish civil war (1936-1939), nearly 60,000 men and women of 53 different countries, grouped in the International Brigades, came to Spain in order to help the republican government. Never before in history had such an extraordinary, internationalist and solidarity cause existed. Young people traveled abroad, willing to give their lives to the Spanish people, whose rights and liberties were being threatened by national and European fascism. More than 15,000 brave international soldiers died fighting against a fascist rising in a country that was not their own. The majority were working people that came from leftist organizations and nearly two thirds of all the IB were also part of the Jewish community that was fighting against the antisemitism present in Europe.

Teenagers played an important role in and out the civil war. First of all, those youth organisations which mobilised hordes of courageous teens armed to destroy fascism, were crucial in the development of the war, not only to fight or organise, but to give moral support and show charity and internationalism with the cause.

The first volunteers arrived in Albacete on October 12, and from there convoys arrived almost daily during the following days. Seven brigades were formed, called XI, XII, XIII, XIV, XV, 129 and 150. Each brigade was usually divided into three battalions, around 650 men in each. These battalions received names with a clear political content, such as Garibaldi or Commune de Paris. Of all the ranks of the IB, the group of brave Irishmen who formed the ‘Connolly Column’, a small unit integrated into the ‘Lincoln Battalion’, gave its name in honor of the Irish Socialist leader. They participated in decisive battles in which, despite receiving many casualties, they gave their best and were vital when defending strategic positions. The outbreak of the war prompted Peadar O’Donnell to mobilize volunteer units in support of the Popular Front among members of the Irish Republican Army (IRA) and other republican activists.

Little by little, following a loss of unity in the front, fascist victories over important cities and the downfall of the republican army, the balance was decanting, balance which was already inclined to the nationals from the beginning, towards what would ultimately be the winning side. On October 29, 1938, the president of the Second Republic Juan Negrín addressed a speech to the international brigadistas to say goodbye to them. They would march hours later after fighting for democracy without achieving victory.

After the departure of the International Brigades, and with the return to their countries of origin, their members were welcomed in different ways. At first, many were labeled as mere mercenaries, while others were decorated in their own land. The arrival of the Second World War showed the role these fighters had played in Spain as they were the first soldiers of their respective countries who had fought against the fascist expansionism of Germany and Italy.

The Law of Historical Memory recognized the brigadistas the Spanish nationality by naturalization, without having to renounce their own. In June 2009, the Spanish embassy in London handed out to several brigadistas their Spanish Passports. In Ireland, especially in the city of Belfast, there are still monuments to the Irish and Spanish freedom fighters that commemorate the suffering and skill of all those who tried, not in vain because their legacy still lives, to end the people with the worst political position, which ruins and destroys all the rights and interests of the working class.
All the young people involved in that conflict demonstrated that they were the most courageous, giving their young lives for the cause, helping people in need and served as examples to young people of the world for their effort and bravery.

Today, they still form part of the historical legacy that such conflicts left behind. More and more young people in Spain are getting more political and they are up to fight in every battle that creates consciousness and fight for their class interests. We must teach Europe it’s past to build a new present.

This month marks the 80th anniversary of the fall of the Second Spanish Republic to a German/Italian backed fascist coup.

Pictured: Teresa Pàmies, at the age of 17, speaking at a meeting in plaça Monumental, Barcelona.