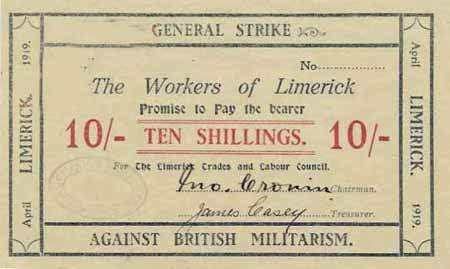 ‘On Monday, April 14th, there began in limerick city a strike protest against military tyranny, which because of its dramatic suddenness, its completeness, and the proof it offered that workers’ control signifies perfect order – excited worldwide attention.’ – Irish Labour Party and Trade Union Congress, 1919

The Limerick Soviet was self-declared one hundred years ago on the 15th of April 1919 in county Limerick. Carpenter John Cronin, leader of the strike committee stated ‘We, as organised, refuse to ask them for permits to earn our daily bread’ echoing the thoughts of many countless workers both then and today. The Soviets importance to the development of class consciousness, the process by which workers learn their position in class society cannot be overstated, and this remains a goal for us to fulfill today.

Approximately fifteen thousand workers organised a general strike in response to the death of a committed trade unionist, Robert Byrne in prison after he was sentenced to a year’s hard labour. While in prison Byrne campaigned for political status for republican prisoners, something which continued for many years after his death. When Byrne was taken to hospital for force feeding during his hunger strike an attempt was made to rescue him, during which he was shot dead. The death of their comrade was a massive shock to the union. On April 9th, 1919, Military law was declared over Limerick, the following day was Byrnes funeral, which had an estimated fifteen thousand in attendance in response to the death of their comrade and the declaration of military law, the general strike was called, the decision was unanimously passed by the Limerick Trades Council. To try to create an atmosphere of fear in Limerick, Dublin castle stated that they could not guarantee that Limerick would have the basic necessities of life. In response to Dublin castles attempt to undermine the soviet many bakers ensured that fresh bread was made every day and the soviet leaders introduced price controls, putting up posters of prices so that the public would be well aware of the proper price. Shortly after this, the soviet announced their own currency with the slogan along the bottom ‘AGAINST BRITISH MILITARISM’.

After two weeks the Sinn Fein lord mayor of limerick and catholic bishops called for the strike to end, and on the 27th of April 1919, the strike committee issued a statement proclaiming the strike to be over.

Subsequent soviets inspired by that of Limerick were later declared, Cork City’s custom house square was seized by the workers and a red flag was flown as the soviet was declared, attracting attention of far-away media such as the New York Times and the Chicago Tribune, however when the Sinn Fein lord mayor of limerick Prons O’Mara was asked about the soviet he replied ‘There is no prospect of socialism, there can’t be, the people here are catholics’. Waterford, Knocklong, Bruree, Castleconnell, Tipperary, Drogheda, county Clare and more! The influence of the soviet was something never seen before

The biggest lesson of the Limerick soviet is that the power for political change lies with the working class, not the ruling class. James Connolly is quoted as saying ‘the great only appear great because we are on our knees, let us rise’, this is shown perfectly in the Limerick soviet. A further lesson of the soviet is that things do not have to be this way. By this I mean that our economy does not have to be arranged in a capitalist manner, and while the limerick soviet wasn’t quite a socialist state, it shows that capitalism can be fought. The soviet symbolises the power the working class truly holds when we are organised. We today must organise our workplaces, our communities and ourselves to bring the Soviet back to life in Ireland.