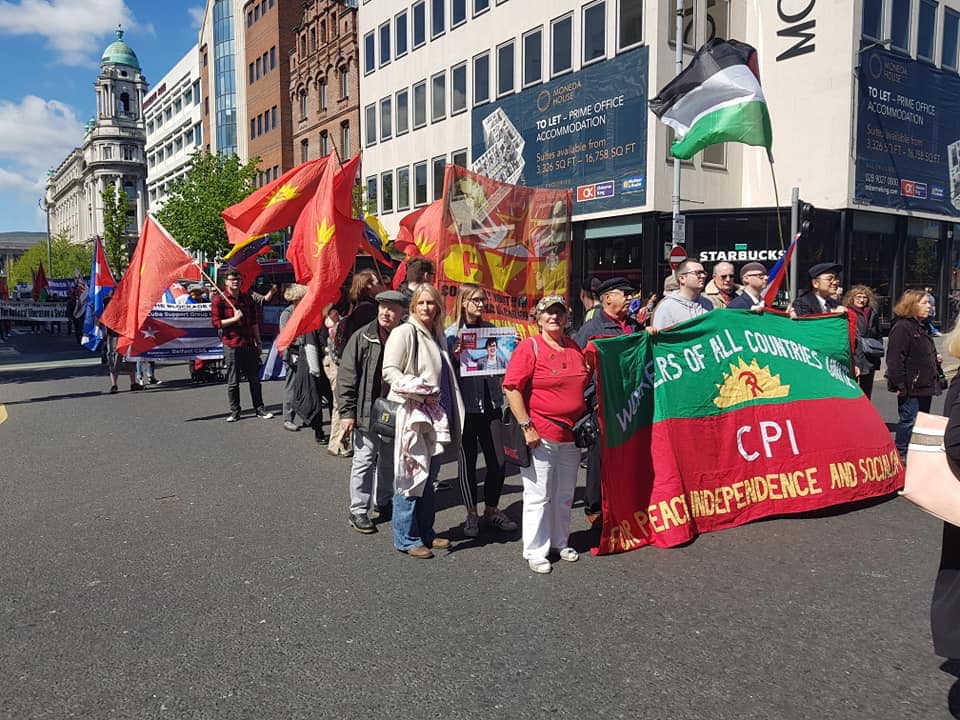 For a decade now, the people of Ireland, North and South of the border have been crucified by a cabal of political parties wedded to the interests of capitalists. For a decade, cuts have been inflicted against the most vulnerable in society in order to “balance the budget”. For a decade, trade unions have not been actively recruiting into their unions from the waves of people joining the workforce. Trade Union membership has dramatically declined and with it so has the share of wealth workers receive for their work. What does that mean?

In practice it means that when a worker heads out for a days work, they make a wage – this wage is a predetermined amount they’ve agreed with their employer in exchange for a set amount of hours or a piece rate of work done. The trend in Ireland for the last 25 years is that the share of the wealth the worker gets in the form of their wage or other benefits has steadily declined. This decline is in conjunction with the decline of union membership and the amount of days workers go on strike.

According to TASC, wealth inequality in Ireland is rampant with their report ‘The Distribution of Wealth’ stating that 72.7% of the net wealth is held by the top 20% in Irish society. The bottom half of the population has 5% of the wealth. These stark numbers may not mean a lot, but what it in effect means is that wealth is concentrated in the hands of an ever growing minority of people in Ireland while the rest of us get bread crumbs.

How is that relevant to the trade union movement and it’s decline is the most immediate question worth asking. Well – a trade union is a voluntary body of workers and unemployed people that represents their interests, primarily but not exclusively against employers. They represent their interests by defending them, as a group, against any attempts to cut their wages, manipulate their conditions or mistreat them. They also represent their interests by lodging requests for pay increases when the enterprise they are working in is performing well. If the workers are working hard and as a result of this hard work an enterprise is doing well – then they deserve a greater share of the wealth they create.

Another important feature in the decline of union activity and radicalism have been ‘social partnership’ deals which effectively lock trade unions into ensuring their members do not engage in radical or militant action. In exchange for this shepherding, the state guarantees pay increases. One could call it naivety – somebody else could call it class collaboration, whatever you call it, the emphasis of anybodies analysis should be on the consequences of the strategy ICTU has taken in the last 25 years. The consequences are mentioned above but to repeat and summarize, a rapid decline in industrial action and union density has befallen the union movement. Therein lies the problem. A secondary and supplementary issue would be the influence the Labour Party of Ireland continue to exert within the Trade Union movement. The Labour Party has been in coalition with Fine Gael and overseen the most ruthless of austerity, despite all of this SIPTU continues to be affiliated to it.

Taking into consideration these issues – the tasks of revolutionaries seem straightforward. If most workers in Ireland, North and South, are not organised or represented, then what is it that we as the spiritual followers of James Connolly set about doing? What exactly is our task and solution to the epidemic within the trade union movement?

For some time now, the Connolly Youth Movement and all its members have made a concerted effort to educate our members in the importance of trade unions. Our research and engagement with young people concludes that most people in the age bracket of the CYM (16-30) now no longer even know what a trade union movement is, or what it does, or how do you join one. We set about the task of educating our own members as to what trade unions are. In all our branches we ran workshops on what unions are and how to engage with other young people on encouraging them to join. We have made union membership a mandatory element of CYM membership but after actually explaining why one should join a union and its benefits. Subsequently – we have made union organising and industrial organising a key aspect of the strategy that the CYM has towards changing Ireland. We have done so because electoral politics have not delivered a greater share of the wealth for the working class in Ireland, we have collectively become poorer in the last decade. In order to reconsolidate the position of our class and strengthen it’s position we believe that union regrowth and union re-organisation should be at the heart of any moves to change Ireland.

The ruling class will tremble significantly more when we organise workers across all sectors of the economy and can at the desired moment grind the economy to a halt. That, in my view is one very important expression of class power that is far above and beyond winning seats here and there and that is crucially why, the Connolly Youth Movement will continue to organise union workshops and actively recruit to trade unions we believe are politically principled and attempting to change the tide.

As a movement committed to transferring the ownership of society to the working class, re-energizing the union movement and rebuilding it is one of the first steps we are going to focus on.