If you head into a Supermac’s you will clearly see that the food is virtually identical to another fast food chain, McDonald’s. If this is an example of the level of ‘innovation’ that we are taught to cherish, then it is a rather odious example. McDonald’s effectively created the branding for the meal style delivery of their food, other chains exist as a by product and in constant competition, but the heavy lifting had already been done. Supermac’s today has 106 stores and owns several hotels in Ireland. It began with Pat McDonagh opening one store in Ballinasloe because he felt there was a demand for the food and perhaps there was, but let us consider the subject of ‘capitalist innovation’.

What Pat did was rather straightforward. He took a small loan out and opened a business, named after his school nickname ‘Supermac’ and copied McDonald’s. He then hired some workers who would actually do the bulk of the work for him. No doubt he likely worked in the enterprise himself to ensure that it came off the ground. However, is it the workers and communities that have benefited from the highly profitable growth of the franchise, or has it been just Pat McDonagh?

Ultimately this is a question that must be raised when discussing social relations within capitalist society. Copying another company and hiring other workers to perform all the manual labour, while opening further stores is the very basic definition of capitalist exploitation.

From the unpaid profits that workers create in his first store, Pat McDonagh opens another store. He hires managers to run it on his behalf. He hires accountants to manage the audits. In fact, the unpaid profit that he earns from his first store is enough to expand and when he opens a second store, it’s enough to expand again. Simultaneously he is able to live luxuriously. So not only can Pat open further enterprises, buy hotels and buy out other franchises from the profit his workers make him, but he can also live opulently, invest abroad and continue to accumulate wealth.

The critique will say “but he took all the risk!”, it is true, he took a small risk when he took out a loan. Does the taking of a small risk permit for Pat to draw on the unpaid profits of 4,000 workers in order to continue to grow his empire?  It’s an interesting question and one deeply linked to capitalist culture and capitalist morality.  In reality, Pat would have returned to his civil service job had he not succeeded in opening the business and that would have been the end of it. From a point of comfort, did he take his ‘risk’.

As Communists, this is our understanding of capitalist social relations, that to benefit from the labour of another is fundamentally exploitative.  Why should 4,000 workers slave away for 40 hours per week in the name of Pat McDonagh? Is there a distribution of wealth into the communities where Supermac’s exists? Do they build houses, hospitals or provide other essential services? The answer you will find is that Supermac’s contributes where it is strategically viable to maintain their reputation, but the ultimate benefactor of the millions of hours of unpaid labour is Pat McDonagh.

How does a man of charity, equity and enterprise accumulate a personal fortune of 120 million?  He does so by drawing the life from his hard working labour force.  The unpaid profits of workers drive the capitalists of today, allowing them to expand, expand and expand. There is no innovation here, there is no enterprise but the most obscene and blatant exploitation. A socialist society should command, democratically the capital that is created and the people should benefit from it. It is without a doubt that the profits Supermac’s make do not go to allowing the workers in Supermac’s to obtain homes, healthcare, or education and the same can be said for every other run of the mill corporation operating in Ireland.

In fact, Supermac’s was part of the Quick Service Food Alliance Ltd. Which made a legal challenge against one of the few mechanisms that protected low pay workers. What the ruling did was nullify the ability of Joint Labour Committees to set binding rates of pay. The legal challenge was successful and ruled the JLC as unconstitutional thereby taking away protections from almost 200,000 low paid workers. This was back in 2011 so one can imagine how many more low paid workers exist in 2019.  The point of raising this is that the fast food industries that backed this challenge (Supermac’s, Burger King, Subway, Abrekebabra, John Grace Fried Chicken) did so in order to increase profit, profit and more profit.

Socialism is the democratic management of economic growth and it’s equitable distribution. Workers would still work and receive wages, the key difference being that the profit they produce, the surplus value they produce would not line the pockets of the Pat McDonagh, Michael O’Leary’s or Denis O’Briens of this world, but it would be geared towards the needs of the community, much like it was in former Socialist countries in Eastern Europe and existing Socialist countries today.

It is unlikely that people such as Pat will be all too inclined to democratise and see an equitable distribution of their wealth. Part of their strategy is to donate some of their super profits to charity or to sporting organisations such as the GAA. They do this for local and political clout, to be seen as ‘benevolent capitalists’ and obscure the fundamental social relation of production: workers create all of the wealth and have to sell their labour power (time) to employers to get by, while Pat lives opulently, holidays and expands his capital in every direction using the wealth he has stolen from his workers. It is capitalists such as Pat, that exert their huge economic power, garnered from hyper exploitation to then influence the political decision making process and that, in a nutshell, is the functioning of capitalist Ireland.

We do not desire more tax, we desire what wealth us workers create or more technically, we are for the dictatorship of the proletariat which can effectively manage and control the means of production and exchange. 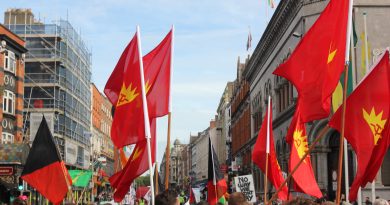