Aidan McAnespie was a young man from Aughnacloy, County Tyrone, whose life was cut short 32 years ago by a British Soldier on this day.

He was one of many young Irish men who faced harassment from crown forces throughout their lives at this time. As his sister Éilish said “The harassment he was getting was unbelievable”. It is clear the harassment he received was deliberate as Aidan crossed the checkpoint twice a day on his way to and from work. Daily questioning was an unnecessary measure. It is important to note that this harassment was also carried out by members of An Garda Síochána, an uncomfortable fact the Free State establishment would wish for you to forget.

The British establishment whitewashed the circumstances of his death, loudly proclaiming that it was a ricochet from an “accidental discharge”. A lie which no one believed. The Free State government launched a Garda inquiry into the situation, the result of which the public has not seen to this day. While the investigation was ongoing, the Progressive Democrats spokesperson, no other than Mary Harney aimed to cover up the story by discrediting any information coming from members of Sinn Féin. Further demonstrating the co-operation that occurred between the Irish Free State and the British Crown Forces in the north of Ireland.

It was in 2008 when the PSNI Historical Enquiries Team demonstrated that the recollection of events which was given was the least likely to happen and only in 2018 when the soldier who committed this heinous crime was going to be charged with manslaughter.

The lesson to be learned is that the story of Aidan is only one of many victims of North-South collusion that continues to this day. As well as the victims of lies perpetrated by Crown Forces and supported by the lackeys of the Free State. The biggest case of injustice today for communists to fight against is that of the Craigavon Two. John Paul Wootton and Brendan McConville were sentenced in 2012 for the murder of Constable Stephen Carroll which occurred in 2009 all on the word of one witness named M. who has been identified as a “compulsive liar”. The pair of republicans had clearly been targeted as political scapegoats of the two main ruling parties. As the Pól Mac Adaim song says: “Justice for the Craigavon Two, next time it could be me or you”. It’s our duty to fight against this injustice.

What Makes a Free Press? 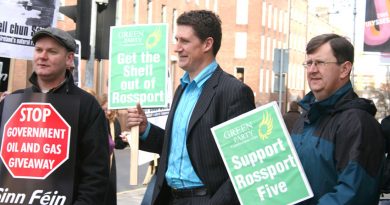