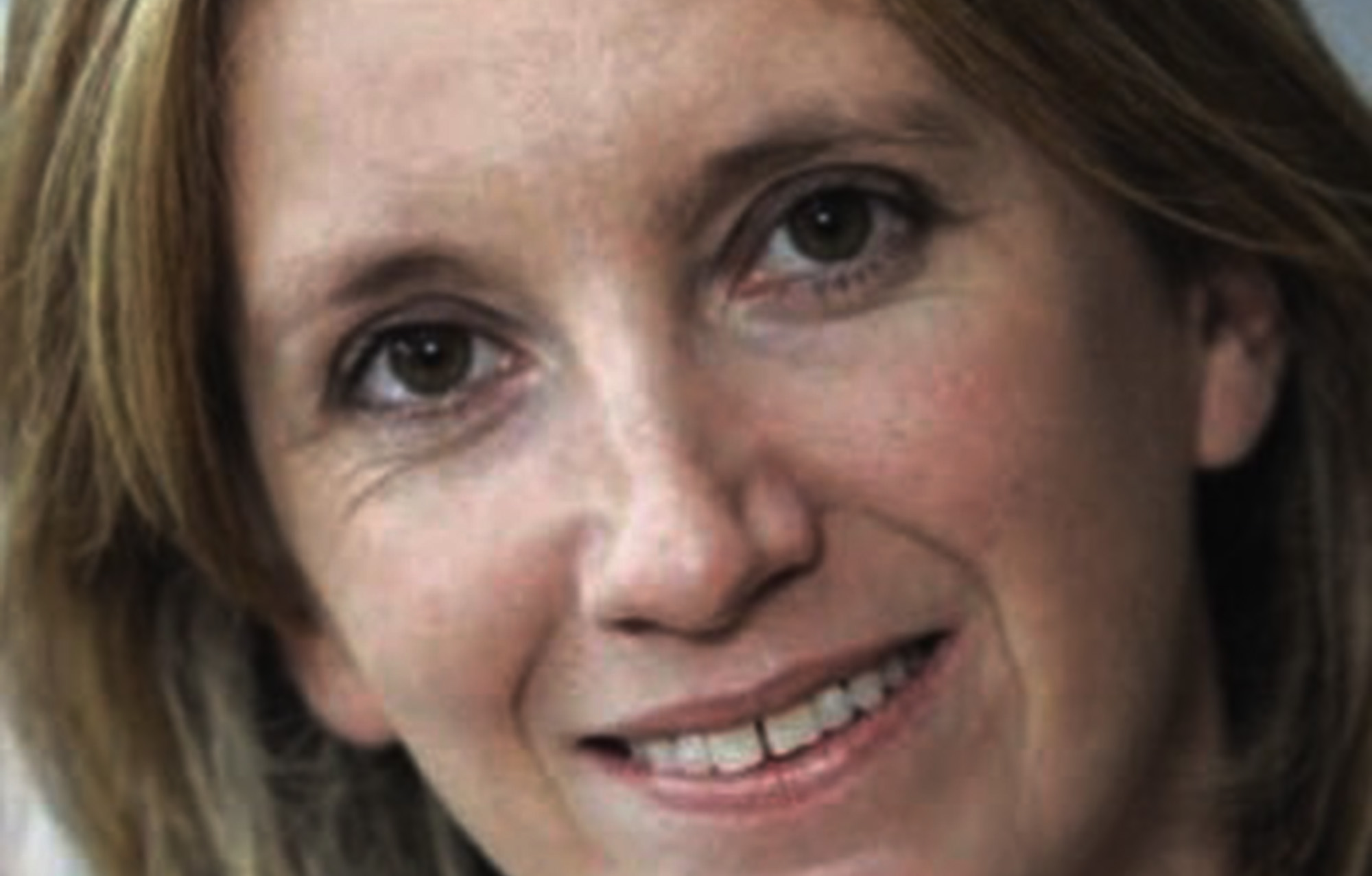 Foreigners, migrants and asylum seekers are not those who sit in cabinet ruining Ireland. Blueshirts backed by Fianna Fail and the Labour Party are!

The Connolly Youth Movement rejects the idea that the solution to countering right wing arguments on migration, borders and the deprivation of communities is by shouting racist, fascist etc. We differentiate that those who are listening to the arguments Gemma O’Doherty is putting forward are skeptical, cynical and mistrustful of the blueshirt regime alongside all the policies they promote. We accept that they see the functions of government as inherently undemocratic and disempowering and therefore are looking for answers, however we say clearly that Gemma O’Doherty does not carry these answers but is using very strong racist and right wing talking points to demonize, attack and separate people on various distinctions instead of focusing her attacks and analysis of society on those who actually create the miserable conditions we all have to endure.

We would like to highlight the fact that there was a huge failure during the presidential election debate to discuss the undemocratic nature of the presidential selection and as a result of Gemma O’Doherty not receiving or obtaining the nominations, she did not stand. We agree that it is undemocratic and abnormal that you must get four council nominations or that of twenty Oireachtas members. By not discussing this the Irish Left created a platform for Gemma O’Doherty. 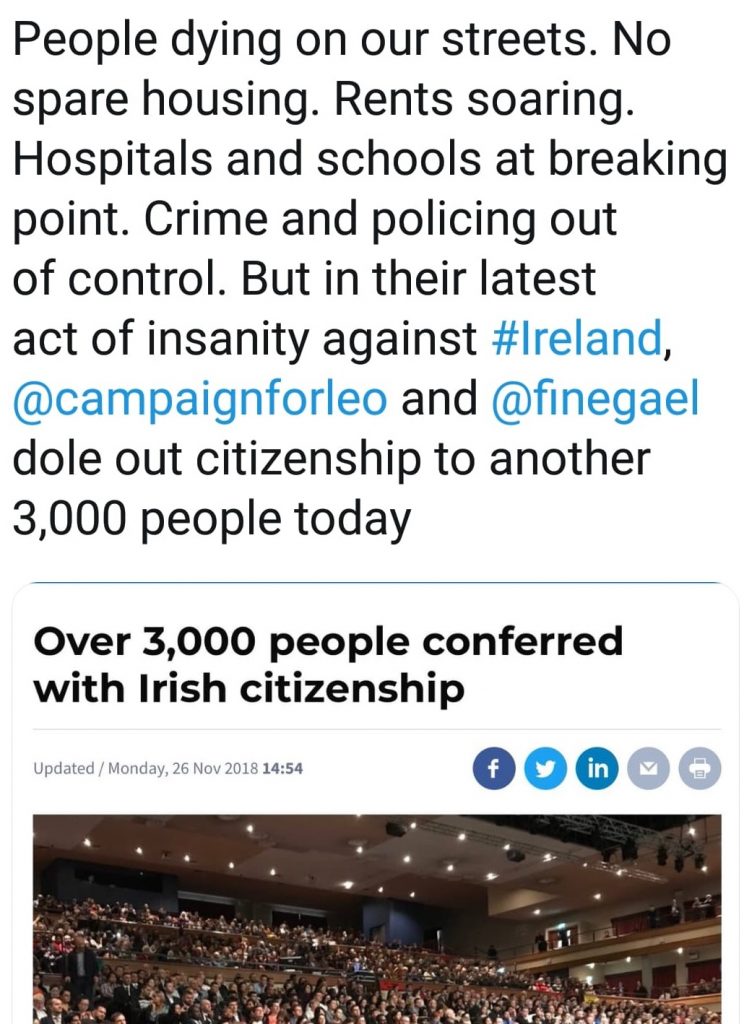 Gemma O’Doherty compares the societal issues we are facing with the acceptance of new citizens, 3,000 of them. We want to make a few points in regard to this.

Firstly, it’s expensive to gain citizenship and not as simple as having it “doled out” to you. It’s also a pretty standard process. If you’ve lived here long enough, have settled here, work here, have family here and generally intend to stay here it’s rather normal that you apply for citizenship. It’s about 1200 euro to obtain citizenship and naturalisation (if not more!).

Secondly, the chronic underfunding of our public services, the soaring of rents, no affordable or accessible housing and other societal issues have nothing to do with migrants or newly naturalised citizens. The reason we have all of those above issues is because Fine Gael, Fianna Fail and the Labour Party have overseen an austerity programme that has transferred wealth from workers into the hands of a small minority in Ireland. They have facilitated privatization, cuts and the defunding of public services all because they do not believe nobody in Ireland deserves them. 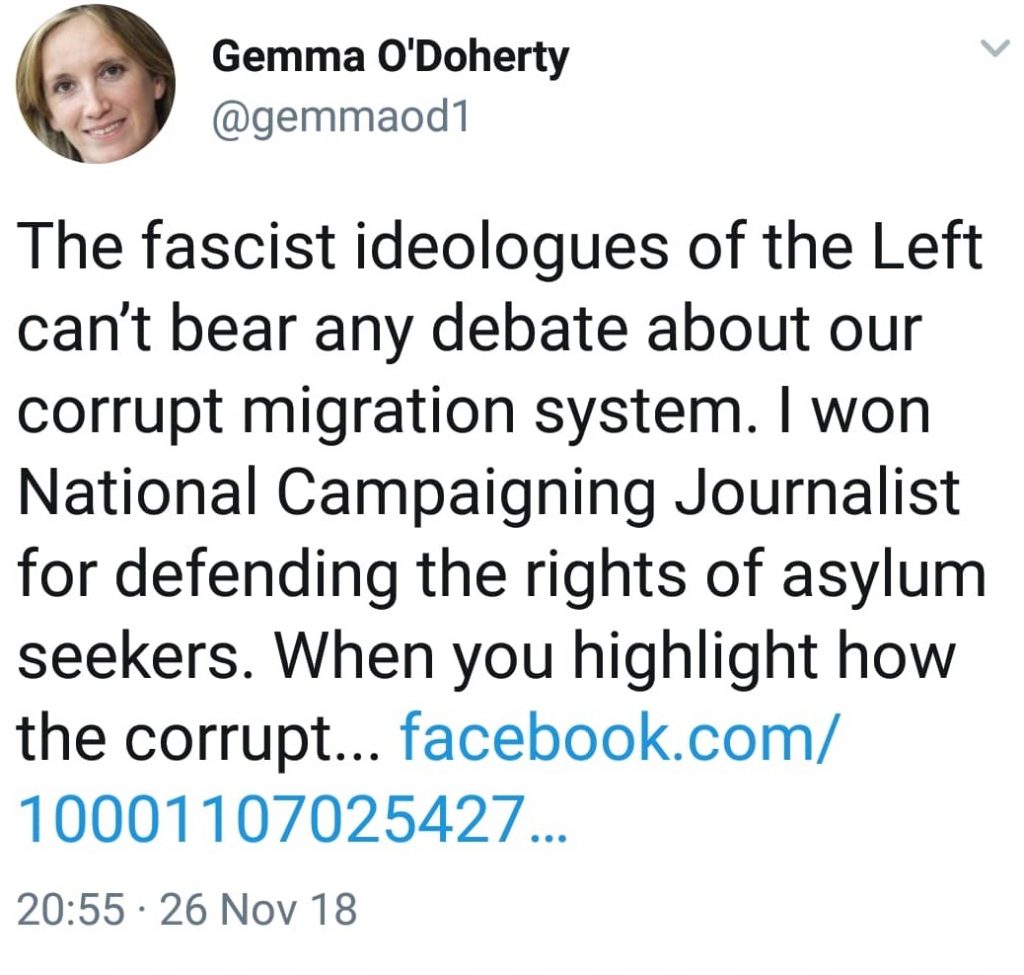 We actually welcome discussion on the subject of migration, but it is you who chose to block our members on your Twitter feed for challenging what you are saying. There exists a great irony here. For so long you have been silenced by the establishment but now you choose to block people who challenge your interpretation. It is an unusual criticism to make. What is exactly incorrect about having interpreters for people who have poor English?  The larger issue here is that the entire justice is commodified, justice is commercialized and centered around money, rather than justice.  Again, another Tweet misdirecting fundamental systemic issues towards. People who speak other languages? Irish language interpreters are probably included in this cost by the way! 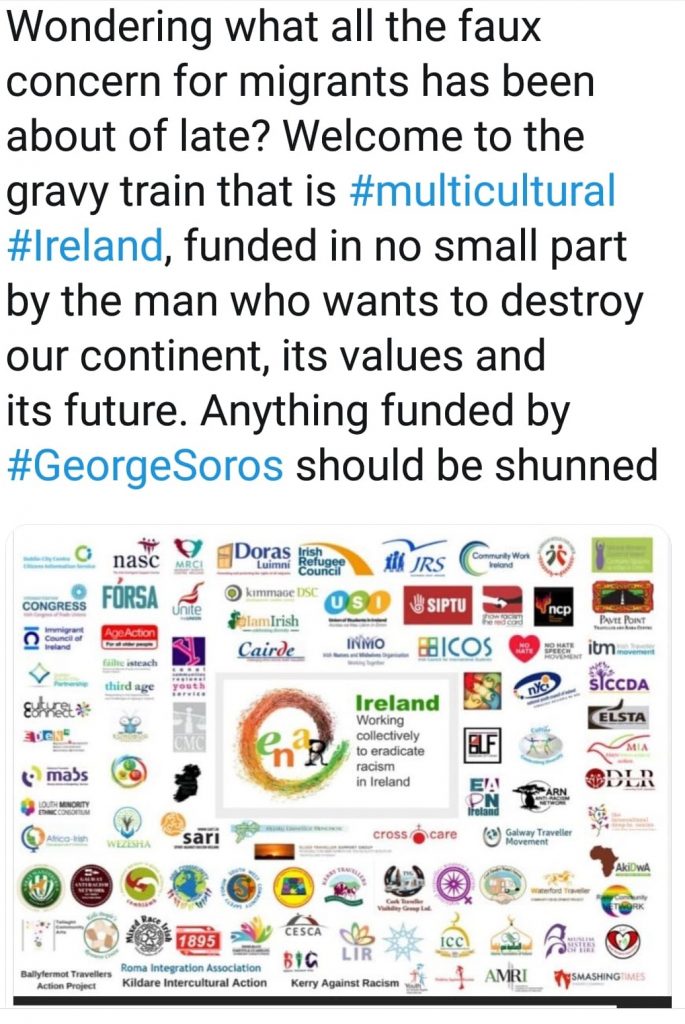 This is another bizarre Tweet that’s not substantiated by anything. There is literally no evidence and we again point out to the fact that if you are an investigative journalist you should investigate and prove what you actually post.  We do however point out that there is a concentration of capital (wealth) in the hands of a few people: (https://www.theguardian.com/global-development/2017/jan/16/worlds-eight-richest-people-have-same-wealth-as-poorest-50) and this is an issue we have to look at resolving. This has nothing to do with George Soros but with the fact that our governments are as James Connolly described ‘committees of the rich, to manager the affairs of the rich’ and operate solely to enrich a small handful of people. To engage in the George Soros nonsense is to distract from the fact that the system is organized and exploitative. You mention Trade Unions, well, trade unions are one of the few entities in the world that have kept the balance of power from overwhelmingly in the hands of the vulture funds and employers. They are also funded by their members via dues. 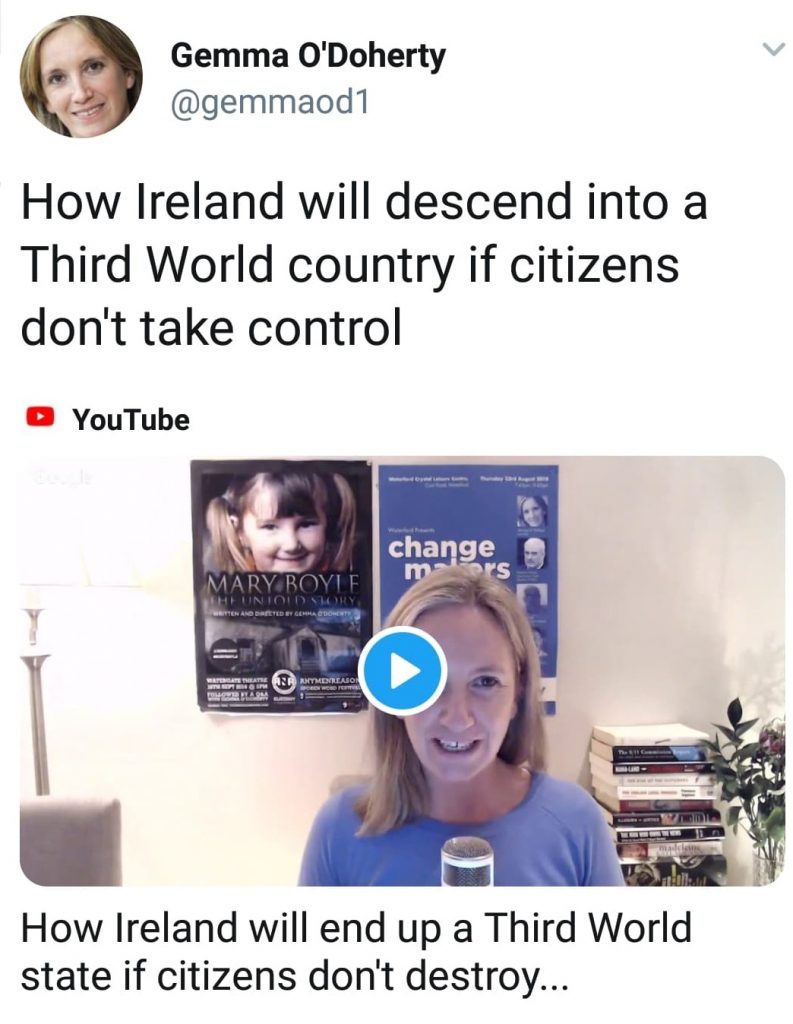 We would argue that Ireland is already descending into a third world country because Fine Gael, Fianna Fail and the Labour Party make decisions that destroy the services and well being of the country. Because they refuse to build  homes, create tax loopholes and ensure that the rich get richer and the ordinary people get poorer. That is the problem. In previous periods of mass emigration and collapse of the Irish economy, dating back to the famine, to the financial recession in the 1930s and in the 1980s, there were no immigrants coming here in the numbers you allege, but we still faced the same problems. Why is that? Capitalism works only for the small few wealthy and not for the rest of us. Immigrants have no bearing on that and are in exactly the same position as those living in Ireland: powerless victims.

As an organisation striving to embody the spirit of Connolly’s works, teachings and deeds we consider that our work must be to unite the dispossessed, the poor, the hungry and democratize our institutions to such a point that we will also be the ones who manage the economy. A more equitable distribution of resources would mean we can look after everybody on the island, ten times over. “Research” suggests the population of Ireland will grow. Yes, it will, because that is what happens when medicine is advanced and people have access to food. That’s a shocker really isn’t it, but that’s usually what tends to happen. The more important question here is the migration call that is outlined. The reason the ESRI does this and the reason that we have a free movement of labour in the European Union is so that the owners of huge agencies, construction companies, farms and so on can directly import workers from Eastern Europe to undermine wages and working conditions. We are in the EU for that reason. The solution is not to blame these workers who are looking to leave their horrible conditions (horrible conditions due to the dissolution of Socialism!) but to organise alongside them against those who benefit: the bosses, employers and agencies. PROFIT is the sole reason workers from other countries are brought in and we want to ensure that workers are paid a wage that is fair to the work they put in. No company should be permitted bringing in workers from Bulgaria and paying them 9.65 p/h for work that should get 17 p/h which is why we need to organise our workplaces and stand together against this hyper exploitation.

This is another reason why the CYM is against membership of the EU. It is anti-democratic in nature and fundamentally challenges Irish sovereignty in all facets, economic, political, social, etc.

On the subject of the UN Migration Pact, many videos are being disseminated about it but it has no legal status in Ireland. For international pacts, conventions or ‘laws’ to have power or force in Ireland the Oireachta\s has to legislate to that effect. That has not happened and we consider this fear mongering merely a distraction from the real issues that are facing people in Ireland. This is again much like the first image. Immigrants are used as a scapegoat for the issues in Ireland. Fine Gael have destroyed the country and are the ones to be held responsible for the issues that are occurring in housing, health and education. There is no connection to immigrants here and they are not responsible for any of these acts. They shouldn’t even be in the same sentence as Fine Gael!

Further to that – there are no statistics to support the argument of this population growth and studies suggest that population growth will be relatively small (https://www.wdc.ie/wp-content/uploads/Reional-Pop-Projections-WDC-Report-Dec-2014.pdf) with us seeing growth to 5.1 million by 2031 which is relatively meagre for a country considered to be so wealthy!

‘Given the difficulties associated in predicting future economic conditions, not alone in Ireland but in the wider global economy, the Expert Group considered it unwise to explicitly factor economic growth into the assumptions on migration, but rather to outline in a more general way three different scenarios of positive and negative net migration. Accordingly, under the most optimistic migration scenario M1, the Group assumed a return to positive net migration by 2016, rising slowly thereafter before settling at an annual rate of plus 30,000 by 2021. This net figure will manifest itself as an annual rate of 70,000 immigrants and 40,000 emigrants. ‘  page 17.

The Central Statistical Office estimates that roughly speaking we have 70,000 immigrants and 40,000 emigrants per annum. Which means only 30,000 people are coming into the country. If you multiply this by 32 (to account for your estimations of heading towards 2050) that’s 960,000 people, so let’s round it off to a million. Not only will we not hit 7 million but won’t even hit 6 and who is to say that many of the people returning won’t be the Irish people that left during the recession?  Again, we consider the mentions of “huge population growth” and “immigrants”, as if the two are interlinked but these are simply ways of a) distracting us from the real issues within Ireland and b) blaming foreigners.

Foreigners, migrants and asylum seekers are not those who sit in cabinet ruining Ireland. Blueshirts backed by Fianna Fail and the Labour Party are!

Final image (arguably the most bizarre one) 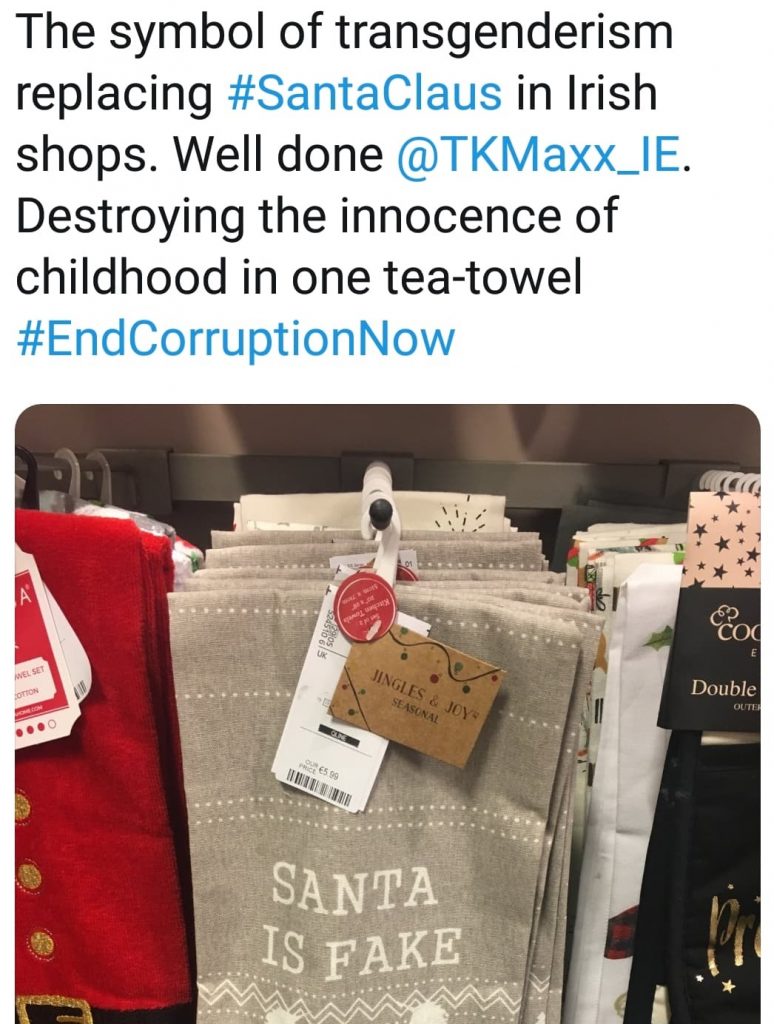 We’re not sure what you are talking about, but we recommend you get a sense of humour because not only is this irrelevant to Trans people but it also has nothing to do with ending corruption.