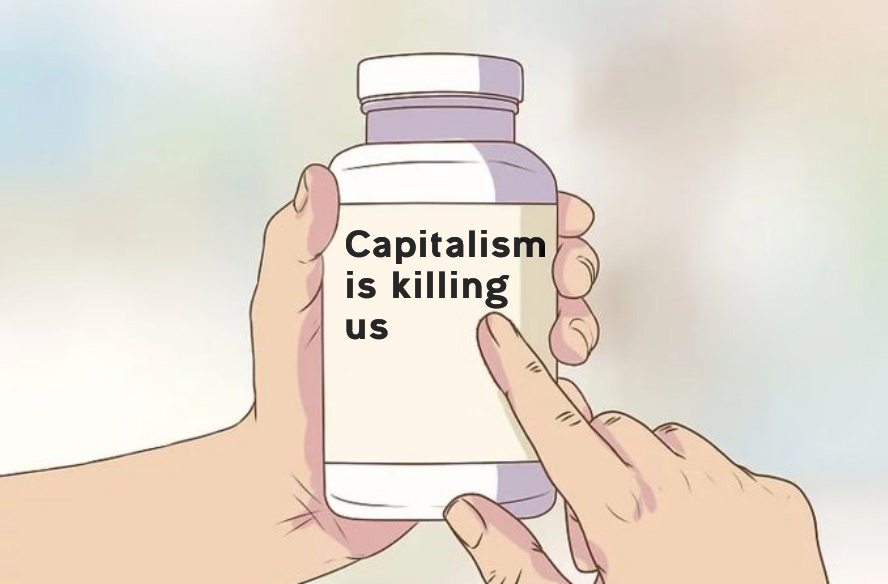 It is in the face of local and EU elections that we feel the most hopeless.

Whether it’s an incompatible vernacular or a lack of philosophical know-how, we find it near impossible to understand this feeling, however, like our species always does, we certainly have found ways of surviving through it.

Sloshed, smashed, blutered, flutered, pished, langered, scattered, wasted or locked – I’d argue we have more words for alcoholism than Eskimo’s have for snow. It is our liquid courage when braving the abyss of life, love and loss, under capitalism.

Because we were raised on false promises of white sands and opportunity, leaving us with only ourselves to blame for our failures. Last year in the 26 counties, every day that passed, another person lost the battle with their supposed failures and ended their life. The cultural hegemony that guarantees peace, in exchange for our labour, turns our mind into a warzone when our own realities come to light.

To quote the late Lyra McKee, “Those who survived the Troubles called us the Ceasefire Babies, as if resentful that we’d grown up unaccustomed to the sound of gunfire, assuming that we didn’t have dead to mourn like they did. Yet we did. The tragic irony of life in Northern Ireland today is that peace seems to have claimed more lives than war ever did.”

While we haven’t been quick to return the physical time we’ve stolen from the exploiting class, our mental time is all but spent.

However the affects of capitalism on the soul are manifold and too often not very clear. Pressures of optimisation have taken the lives of 14 year old junior cert students, the continued commercialisation of the young has destroyed self confidence, dog-eat-dog ideologies in schools turns bullying levels in Ireland closer to rates in the United States – with self-harming and eating disorders following suit, LGBTQ people’s find their existence accepted under capitalism to be a hollow liberation, the overwhelming ecological doom of our species cripples us and the loss of communities across the island has turned loneliness and social anxiety into a pandemic that a capitalist pill cannot fix.

Through the alienation of our labour, through the individualism of society and through the commodification of our being, we feel we have lost all control. We rip up our wrists, lungs, kidneys and minds in an attempt at reclaiming any semblance of mastery over ourselves.

In the face of local and EU elections, we can be quick to feel parliamentary politics is yet another failure, almost as if intentionally designed under capitalism. Many would sooner believe that the Irish electorate is incapable of running it’s own affairs, due to consistent reelections of establishment politicians, that rural areas are lesser than urban ones following referendum results or the belief that young people are incapable of understanding or caring about the world around them.

The men and women of 1916 didn’t just fight for an Irish republic, but for a republic of the mind. That we would find hope in an existence of such uncertainty. That fraternity and community would come before greed and that we could be the supreme arbiters of our own destinies.

Taken from the speech given at the Communist Party of Ireland’s annual James Connolly commemoration at Arbor Hill, by the CYM National Chairperson, on the 103rd anniversary of his execution by British Imperialism.

1 thought on “What a Capitalist Pill Cannot Fix”